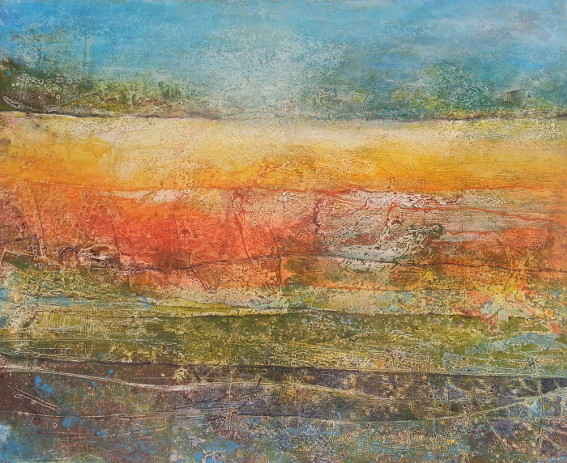 Vanylle Bertin lives and works in the Haut Pays Grassois. Born in 1961 in Cannes, she always liked to draw. She discovered her passion for painting in 1986 in Martinique where she lived for some time and studied on her return in France with different professors of the Association of Fine Arts of Cannes, Le Cannet, Grasse: drawing, modeling, Painting and various techniques: watercolor, acrylic, oil and pastel dry. She did not begin exhibiting until 1993 during collective artistic events in the High country of Nice, Grasse, Cannes, Mouans-Sartoux. 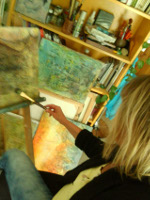 "From his fingers gush color, softness and light giving shape to the mysteries" will be the qualifier of his painting of the time when his creations in pastels predominate on his work. This technique allows it to express a very particular and particularly appreciated light but it also has its limits.

It was around 1999 that she devoted herself to the mixed technique, oil and acrylic. In 1998 she opened a gallery workshop in Grasse, in the heart of the old town. This new life among Grasse artists, she totally appreciates it but not life in town: She leaves her studio around the year 2000 to continue her research in her home in the mountains of the Haut Pays Grassois: "I need nature And wilderness areas " Painting is for her a means of escape, expression and sharing. She likes to show in her paintings the truth and the mystery of life. Above the void, like a tightrope walker, she touches the sacred while living the present moment when each painting tells a new story. Her painting tends to the abstraction between the known and the unexpected. One would say that it seeks the truth of what surrounds it beyond what the eye perceives. His paintings plunge the observer into a universe abounding with life beyond matter. A thousand people seem to assemble consciously to make bodies, looks, figures, crowds, trees, flower beds, bark ... She loves that her paintings convey beauty, tenderness, truth, and that forms, colors, The matter speaks to him and awaken to several possible births. His painting evolves and the series succeed one another. Still in search, never satisfied, she still tries to paint the light, the emptiness, the great emptiness filled with everything ... The looks, the characters are no longer there or very discreet. Abstraction asserts itself and takes place with nature, wind, movement, sea, water, sky, space ...

SOME INDIVIDUAL AND GROUP EXHIBITIONS:

We have 877 guests and no members online